Football supporters have a deep emotional bond with their clubs, whatever their faults, but loyalty can be seriously tested if the club appears uncaring or unwilling to comment on a looming crisis. 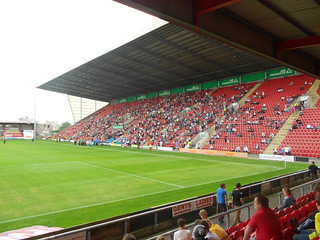 As many friends know, I am a football fan, a follower of one of English football’s perennial under-achievers: Crewe Alexandra F.C. I have supported this club since the early 1970s, when I grew up roughly three miles from Gresty Road. My first visit to my even-more-local team, Nantwich Town to see a 1-1 draw against Rhyl hadn’t impressed me, but the Fourth Division ‘big match’ atmosphere regularly tempted me back to Crewe (OK the average ‘crowd’ in 1973 was around 2000 or so, but it was substantially more than the ‘Dabbers’ ever got). When I moved away from south Cheshire, I continued to follow ‘the Alex’ whenever they played anywhere nearby, even co-founding the Alex Exiles fan club (now a Facebook group), running an Exiles fanzine (“Without a Dream in My Heart”) and creating the mid-1990s Crewe Alexandra Extravaganza website.

Fortunately, during those times, the club enjoyed some modest success, clambering up the league tables to play several seasons in what is today known as the Championship (the second tier) during the late 1990s and early 2000s, before sliding down and returning to more familiar fourth tier positions. Key to that success was manager Dario Gradi and the club’s policy of developing home-grown talent via its academy set-up (Danny Murphy, Dean Ashton, Seth Johnson were among the most notable graduates).

However, during the past week the reputation of that academy and the club has become tainted.

One of the club’s early youth system products was a Stockport-born defender Andy Woodward, and he was persuaded to join Crewe in the early 1980s when he was aged about 11. According to the first of a series of newspaper articles in The Guardian, plus broadcast interviews (extensively re-reported by other media), he was targeted by a football coach and scout, Barry Bennell (convicted in 1998 as a paedophile), employed at Crewe and other clubs in the area, including Manchester City and Stoke City. Woodward suffered repeated sexual abuse by Bennell, which he says led to later panic attacks and other psychological problems. The press revelations apparently extend to other players and include child sexual abuse by at least one other coach, but in the midst of this scandal, this crisis, Crewe Alexandra has refused to say anything.

The club I support, a club repeatedly held up as a fertile production line of young footballing talent, has, to the disappointment of many supporters (I talked to some before and after the match at Barnet on Saturday), made no statement about the affair. This tight-lipped approach is frustrating journalists – Daniel Taylor, who broke the Woodward story, wrote in this weekend’s Observer:

“… there are so many questions that have never been satisfactorily answered. … What a cop-out, what a dereliction of duty, for the club, the directors and their media department to think this can be swatted away like a bothersome fly.”

Other journalists have badgered the club for statements, but the chairman John Bowler’s view – shared by the Mail on Sunday‘s Oliver Holt – remains ‘no comment’:

“The press office was polite but firm: ‘We are not making any comment.’ I asked if there were any plans to make any comment. ‘It depends what unravels,’ the club said.”

I know Crewe fans who have said they won’t watch the club again until a fuller picture emerges; others (like me) are disillusioned or worried, sharing views on Twitter: “The ‘no comment’ line is pathetic & makes you wonder what they’re hiding,” said one-time Alex Exile Tim Robinson, continuing: “The tone of these articles is designed to make you think there’s more ugliness to come.” Long-time friend, fellow fanzine editor, and prolific Crewe Alexandra author Jules Hornbrook writes:

That the club – our club – cannot even issue a public message of support to a former player during this time, or openly state backing for any subsequent investigation, is beyond contempt.

I am sure there are legal considerations, but we can only hope that such a basic statement is forthcoming soon.

Of course, we are horribly conflicted, hopelessly biassed. As football supporters we have an emotional bond with the club, whatever its faults, but our loyalty is being seriously tested, as Jules concludes

The way things are playing out at Crewe Alexandra, there’s a danger that many of the club’s supporters will lose all faith in an organisation that for many years has been a beacon of hope in a murky football world.

The game should be about fun, excitement and celebration. It should not leave dreamy, impressionable young players fearful for their personal safety.

What many of us know as a rock-solid football club, famed for decades of work with young up-and-coming footballers, is in danger of falling apart.

Crewe Alexandra, and clubs across the country, should step up, confront this issue head on and ensure that historical abuse cases are investigated properly.

Stonewalling is not acceptable. Men like Andy Woodward deserve better than that.

It pains me to watch the club I support try to carry on as though nothing has changed. It also pains me, as a PR professional, to watch a communication vacuum being created, allowing all manner of speculation to thrive, damaging the club’s reputation and threatening to alienate its most important audience: the Crewe fans whose hard-earned pounds are vital to the club’s financial survival.

In 1998, after Bennell was tried and convicted at Chester Crown Court, Crewe Alexandra FC was not subject to detailed investigations, but the case has remained the subject of occasional awkward conversations among its fans for years. The Woodward revelations – particularly if not addressed – add fuel to speculation, accurate or not, that, perhaps, there is more to come out at Crewe. 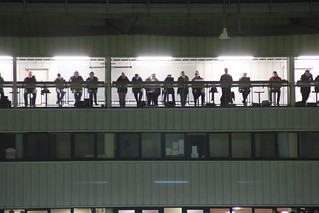 Maybe the club thinks that, because it was able to ride out the storm in 1998, it can do the same 16 years later. But a “lie low and say nothing” approach to crisis management can seriously backfire these days. Now we have a content-hungry 24/7 news media and a huge social media echo chamber. Saying “no comment” has three impacts:

And a further consequence is that news media will look elsewhere for ‘expert’ comment – some of it almost certainly less well informed. Such ‘experts’ may engage in damaging speculation about what happened, how Crewe responded, and what the club should now be doing about it.

And should the club need to communicate some awkward information in due course, its short-term “say nothing” strategy has already undermined its relationship with journalists and with key local stakeholders; without explanation, even a well-intentioned delay can begin to look like deception to outsiders.

In my view, Crewe need to be seen to be pro-active in dealing with the situation. A statement of concern or sympathy towards Woodward would help, plus a simple ‘holding statement’ along the lines of:

“We have fully cooperated with past investigations and will cooperate / are cooperating with the relevant authorities in any further enquiries. We will give further updates when we have more information.”

Update (11pm: 21 November 2016) – The Guardian‘s Daniel Taylor has reported comments from Crewe chairman John Bowler (it was also reported that six other individuals had contacted the police, and that the Football Association was setting up a helpline). The comments suggest an abrupt change of policy during the day (Dario Gradi earlier said he understood nobody from the club should talk to the media). Bowler is quoted:

“All this came out of the blue. … When things come out of the blue you want to make some inquiries from within. There is no doubt we concur with what the FA have said and we are now looking at it from within and considering what our actions should be going forward.

“We are a proud club and when allegations are made that we didn’t take it seriously we want to reflect. I will be meeting with the directors to review the situation. I’m the chairman but we have a board of very dedicated people who are at the heart of what Crewe Alexandra are about. We don’t take lightly – and I don’t mean that aggressively – any of these comments. We are not belittling anything.

“I’m not asking you to be kind but please don’t be too unkind because we really are taking it seriously and looking at the whole issue. We are talking about something 30 years ago, and a lot has changed in that time, but we must look at the current climate and, if we are to make changes, not just at Crewe but in football.”

Too little, too late

In short, Bowler (who also expressed sympathy for Woodward) has broadly followed good practice in terms of content – be seen to be taking it seriously, empathise with victims, be seen to be cooperating, and indicating next steps (a board meeting).

However, these words have finally been voiced several days too late for many fans and for the media. The club’s reputation remains damaged. It will need to be more responsive and proactive if it wants to limit this damage.

Updates (4pm and 10pm, 22 November 2016) – A statement repeating much of John Bowler’s comments was posted on the club’s website at around 2.45pm today, but the club has still been criticised by Woodward for failing to apologise:

“… not one person from Crewe Alexandra has ever contact me to see if I was OK or to say they were really sorry this happened at their football club. Even now, they’re still failing to say they are really sorry this happened. I need them to say sorry. Everyone who was involved – and there are people coming forward every day – will want them to say sorry but unfortunately this statement doesn’t surprise me and it feels like to me there is almost an air of arrogance on their part.”